A Shopaholic Goes to Kolkata 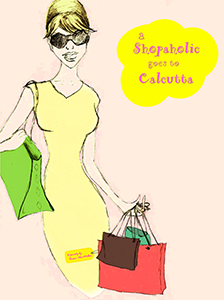 Go to Table of Contents

This story was originally written for my Media Law course at NYU-Poly. The assignment was to produce an artwork which raised a legal issue, in this case one related to trademarks and copyrights. Enjoy it while you can – copyright and trademark law restricts parody more and more every year.

A caveat about the content. The main character, Bexx is supposed to be a charming but unsympathetic shopaholic. This story is ultimately a critique of her behaviour. HOWEVER, when writing in her voice I compose words which progressives may condemn as “neo-colonialist” and others view as offensive, particularly to fabulous city of Kolkata. I have done my best to tone down the offensive words and where-ever possible balance them with something positive: there are a lot of positive things to say about Kolkata, and detractions like grinding poverty. Not unlike my adopted city of New York, and increasingly my home city of Toronto.

That being said, if a reader has issue with Bexx’s offensive world-view and language – or identifies errors of fact – please politely let me know. Don’t forget that Bexx is a neo-colonialist so the narrative challenge of this story is to allow her to speak as such without being unduly offensive. She has to be a little bit offensive or she’s not true to her type.

A final word, to motivate you to read the story to its conclusion. This story is a parable, with a moral at the end. I’ve put a ton of thought into making that moral much less obvious than it appears. My questions for my readers are: “What lesson does Bexx learn during her visit?”, and “Does her insight fundamentally change who she is?”

Finally, a note on Sophie Kinsella’s Shopaholic books, which this story parodies. Although I do not know whether it is accurate to call shopaholism is a disease, conspicuous consumption undeniably has massive, negative, social/economic/ecological consequences. After reading most of Ms. Kinsella’s works, my opinion of shopaholism has not changed, but my opinion of Ms. Kinsella’s skill as a writer has. Her stories are genuinely charming and funny, and self-aware enough that they never cross the line into the obscene, which is an achievement, because from an environmental perspective shopaholism is obscene.